More monstrousness for Monsterhearts 2. There are seven Skins remastered from the Monsterhearts 1st edition product Skins for the Skinless and three new Skins which are ready to be brought into your games of urban fantasy.

The Skins in this product are:

The Angel Hopeful, giving, and deluded. The Angel is the kid that who has been sworn to something they don't fully understand.

The Calaca Optimistic, perceptive, and invasive. Not everyone fears death and not everyone who has died really cares that much.

The Fury Introverted, skittish, and naive. All that the Fury wants is to have a friend or maybe a lover.

The Jorogumo Calculating, manipulative, brazen, and clingy. The Jorogumo is about knowing what you want and going for it however you best see fit.

The Minotaur Angry, scary, forceful, and hurt. The Minotaur is a bully that wants desperately to be accepted even though it seems like all they’re good at is hurting people.

The Mummy Regal, controlling, empowered, and short-sighted. The Mummy is a person who knows they can demand the finest of the fine and get it.

The Muse Talented, inspired, and cloying. The Muse demands attention while being unable to take the spotlight for themselves.

The Proxy Observant, possessive, paranoid, and stalked. It’s all coming down upon the Proxy and to survive it may mean sacrificing others.

The Unseen Overlooked, watchful, needy, and seething. The Unseen is ignored and forgotten more than they are actively excluded; always an afterthought, just on the outskirts of everything.

The Wyvern Frustrated, determined, sublime, and often misunderstood. The Wyvern is a novelty to others but not to themselves — they would be perfectly comfortable in their own skin if others would only stop commenting on it.

Thanks to Topher Gerkey's kindness I was allowed to put my own spin on these Skins and am very pleased with the outcome. The Angel is distinct and not connected to the Angel from Monsterhearts 1st edition.

Slip on these Skins and bring some mayhem to your table!

In addition this Bundle also comes with the following Skins as extras in the purchase!

The Harpy  Bitter, haughty, wounded, and nihilistic. The Harpy is about feeling like everyone has more than you and being more wrathful than envious.

The Mermaid Comforting, reliable, yet always separate. The Mermaid is about being in a world that is not fit for you and finding your place in it.

& The Princess Poised, prepared, and drastically in over their head. The Princess is about knowing what is expected of you in life and trying to live up to those expectations that seem insurmountable.

In order to download this game you must purchase it at or above the minimum price of $12 USD. You will get access to the following files: 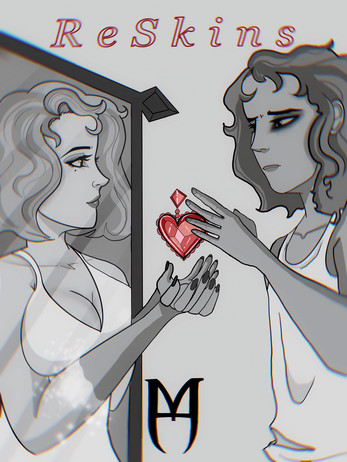